Wireless Challenge 5: ROAMING - HOPPING FROM NETWORK TO NETWORK IN REAL-TIME

Over the course of this series, we have demonstrated the ways in which existing wireless technology and methods can be applied to meet the strict performance requirements of time-critical industrial applications. That said, hurdles still remain regarding a key Industry 4.0 use case – flexible, reconfigurable shop floors enabled by mobile stations. Can existing wireless techniques provide these mobile stations with a stable real-time connection over their entire operations area?

Currently, the two most popular methods to ensure wireless coverage over a wide area are roaming and mesh networks. This entry will analyze both methods and explain why roaming is the ideal solution for industrial automation.

Mesh networks have become increasingly popular in recent years. This is due to both their flexibility and implementation in WiFi and WirelessHART networks.

The concept of mesh networks themselves is simple and ingenious - all nodes connect dynamically and non-hierarchically to as many other nodes as possible, then route data to the receiver via the most direct path. Every mobile phone user has at some point found themselves in a room with a weak and constantly dropping WiFi signal, negatively impacting their user experience. Mesh networks provide an effective solution by harnessing other WiFi-capable devices in the vicinity (as there are typically several of these devices in any given location) to create a clear path to the router.

A mesh network can also increase its coverage area with the number of stations added. A baseline coverage area of 20m can increase to 100m simply by adding five new stations in strategic locations. This solution is highly flexible and versatile, as all stations are transceivers that can both send and receive data packets. 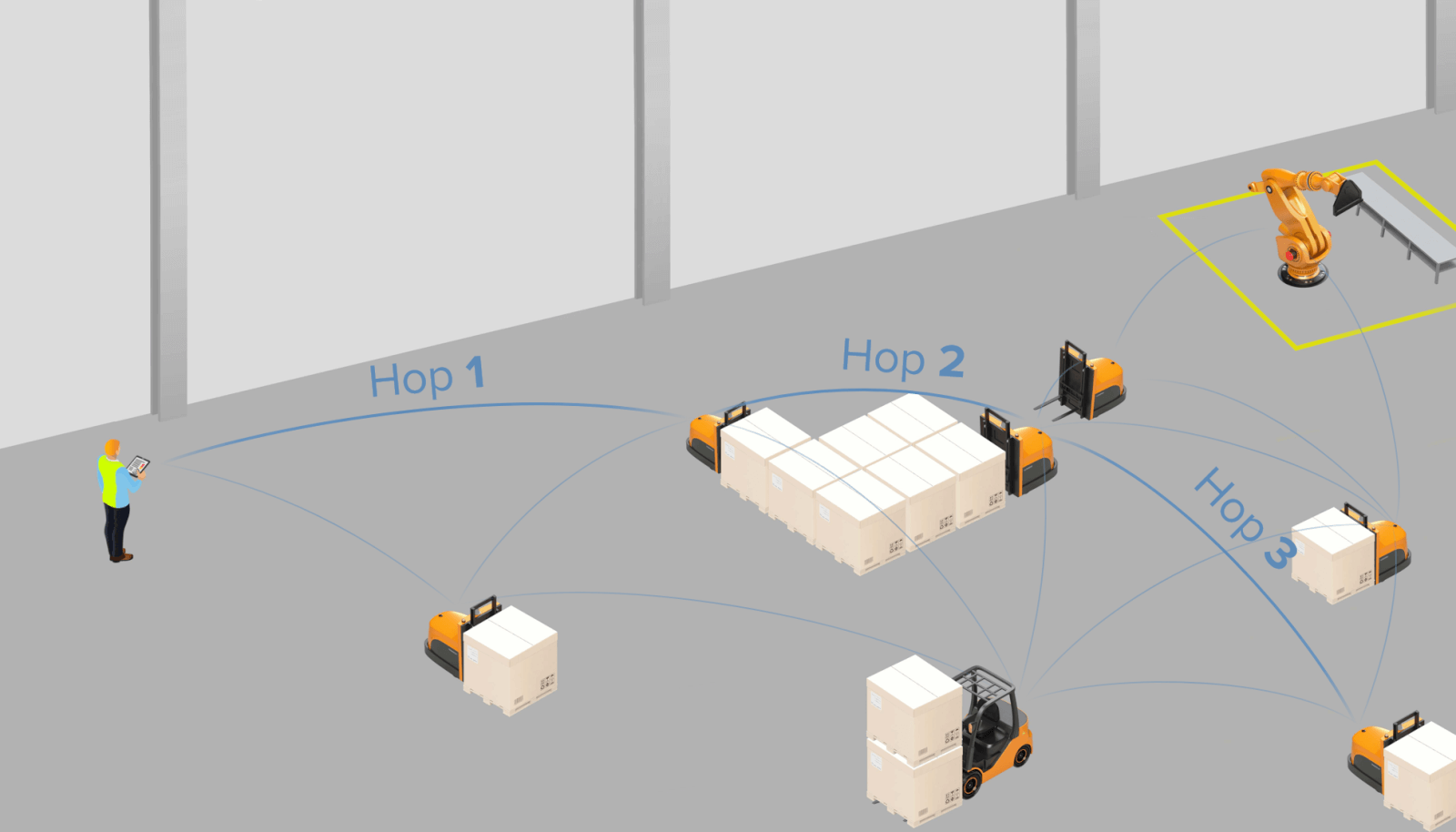 A mesh network comprised of AGVs, forklifts and a human operator (master)

That said, certain flaws are inherent in mesh networks that make them unsuitable f or time-critical automation. To start, mesh network transmission latency can be long and unpredictable – if a transmitter is two “hops” away from a receiver (see figure above), the transmission’s latency is multiplied threefold. The longer it takes for a data packet to transmit, the longer said data packet occupies the channel and prevents other stations from transmitting. This latency increases further with the density of mobile stations in the network. Furthermore, each rerouting attempt requires an update to the network’s routing table, which can result in a lost connection. As cycle times in industrial applications are heavily optimized, mesh networks are not scalable beyond a certain threshold.

Mesh networks also struggle to guarantee unbroken service, especially when wireless stations are mobile. Consider automated guided vehicles (AGVs), which typically operate in large shop floors with many obstacles between them and the Central Control Unit (CCU) - typically a worker with a control tablet. While a large number of AGVs would increase the network’s coverage, they could all still find themselves bunched up out of range of the CCU, triggering an emergency stop. The CCU-holding worker would then have to walk over and reactivate them manually. It goes without saying that a setup with this kind of productivity risk is unsuitable for time-critical industrial requirements. 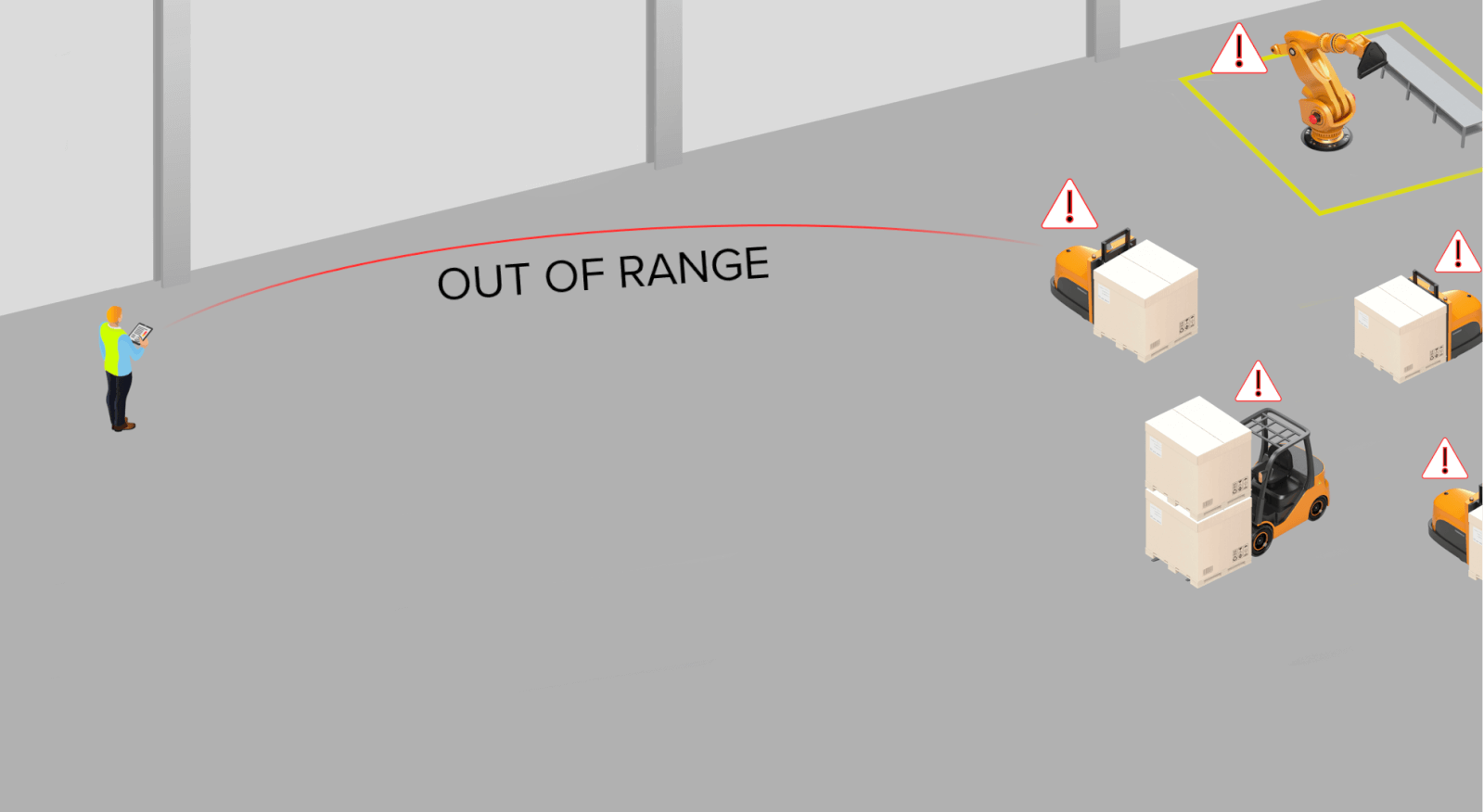 Roaming is defined by a signal packet being “passed” from one network to another. To the average consumer, roaming often refers to mobile phone service beyond the standard coverage area of a service provider, often while travelling abroad or in sparsely populated areas. To provide a seamless user experience, handovers must be imperceptible (typically around 50ms), which is made possible through strategic placement of signal tower base stations. These signal towers comprise what is known as a backbone network - predictable, immobile wireless nodes providing reliable coverage to unpredictable mobile nodes. This principle can also be applied to wireless industrial networks.

Roaming-capable wireless networks have yet to be deployed in factory floors. While 5G, falling under the Ultra-Reliable Low-Latency Communications (URLLC) umbrella, is developing industrial wireless solutions for this exact purpose, a long wait remains before the required infrastructure and retrofits are in place. Thankfully, existing non-cellular technologies such as Wireless Local Area Networks (WLANs) can easily meet wireless manufacturing requirements, with little to no overhauls in existing infrastructure.

In the context of wireless automation, a backbone network is comprised of non-mobile wireless access points (routers) connected – usually by cable – to the network CCU. A strategically placed backbone network can easily cover all corners of a shop floor, providing uninterrupted service to all mobile stations (AGVs, untethered robotic arms, autonomous forklifts, etc.). These mobile stations continuously evaluate the signal strength of their current and adjacent subnetworks, roaming between subnetworks as necessary to optimize latency. 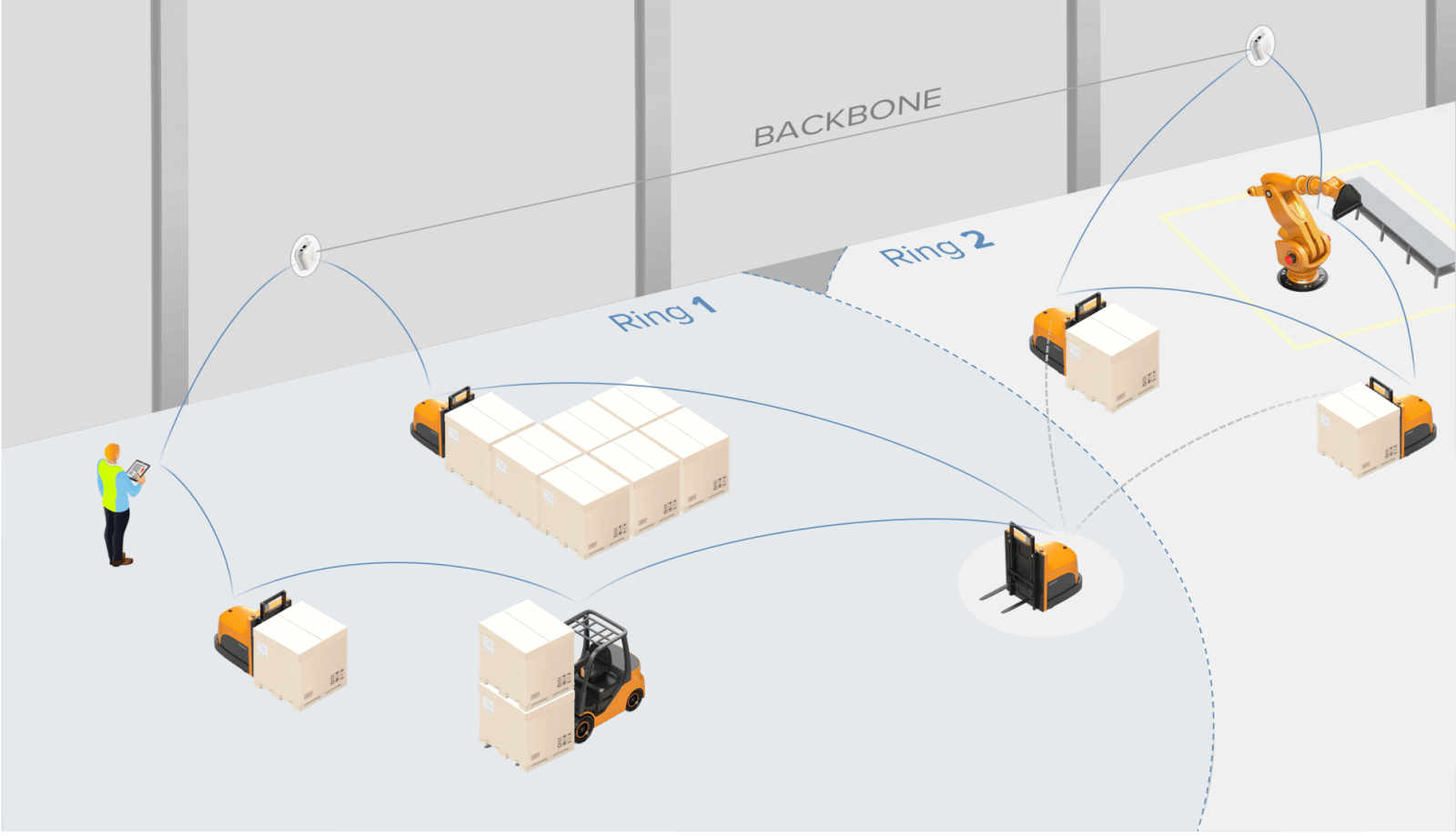 Real-time, low-latency handovers between backbone subnetworks is the second piece of the wireless automation puzzle. To achieve this level of performance, one of two intelligent mechanisms must be employed: application-driven or network-driven decisions.

Application-driven decisions allow for centralized network management. This means that the network's CCU can determine both the optimal signal a mobile station can roam to and the optimal time of the handover itself. Handovers are determined based on both the mobile station’s location (detected by an internal or external positioning system) and the network’s deployment plan. This precise control comes at the cost of latency, however, especially in larger and more complex industrial networks with more nodes. As shown in the OSI (Open Systems Interconnection) graph below, an application-driven handover request to the CCU must pass from the Application Layer (Layer 7) to the Physical Layer (Layer 1) and back again - the entire span of the OSI model. Compounding the issue is that each OSI layer runs on a unique protocol and requires a unique translation for the request.

Network-driven decisions meanwhile have each individual station decide when and to which signal to conduct a handover, independent from the CCU. To achieve this setup, mobile stations analyze, send and receive continuous updates to each other on the relative signal strength of each subnetwork. The key advantage of network-driven decisions is their low latency even in large and complex networks, as the handover request must only pass from the MAC layer (Layer 2) to the adjacent Physical Layer. These requests are also application-transparent, allowing the CCU on the Application Layer to focus solely on its assigned task.

The main disadvantage of network-driven decisions is their lower precision and less effective network optimization, as they lack a comprehensive network overview from the Application Layer.

Ultimately, the decision to employ application or network-driven decision-making hinges on a use case’s complexity and performance requirements. In either case, automation applications involving mobile stations must ensure that all handovers occur within the threshold of the application’s set latency, to avoid triggering an emergency stop.

EchoRing was developed from the ground up with wireless automation in mind. It employs a backbone infrastructure to ensure continuous real-time connectivity, and easily adapts to both ad-hoc (decentralized) and standard access (centralized) network topologies. EchoRing also supports both application-driven and network-driven decision-making, allowing users to select the method most suited to their application’s requirements. This flexibility allows for optimal functionality in a wide variety of use cases.

As explained above, network planning is key when setting up and deploying backbone infrastructure for an EchoRing network. The user must identify key service areas that require uninterrupted connectivity, then dedicate EchoRing nodes to these areas as necessary to comprise the backbone network. It is also important to determine the required number of network “rings” (subnetworks) and allocate operational channels by order of importance.

This concludes R3's series on the key challenges faced (and overcome) by wireless industrial protocols such as EchoRing. For more information and to speak with one our experts in depth, please reach out on R3's Contact page.